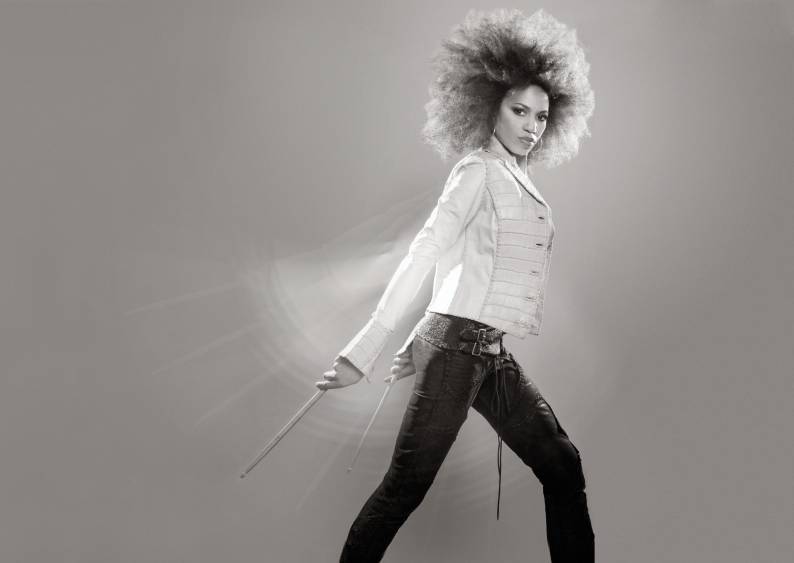 I recall seeing Cindy Blackman Santana when she toured here in the mid '90s, playing her original compositions with leading local musicians in Paul Grabowsky, Scott Tinkler and Philip Rex. She was a mighty impressive drummer back then, but it's fair to say she is playing at a yet higher level these days. No doubt that can be attributed to the intervening years involving countless hours of ongoing practice, and countless hours of acquiring more experience and knowledge on the bandstand, with all kinds of elite musicians. It must also reflect the advantage she has in performing this time around with her regular bandmates : Zaccai Curtis (keyboards), Aurelien Budynek (guitar) and Felix Pastorius (6-string bass guitar).

From the outset, all four players were in sync, effortlessly slipping into the right groove, whether they were playing a slow, slinky blues or a strutting funk number. Blackman Santana rarely played a solo, but in a sense she was constantly soloing, as well as piloting the band, whether bringing the volume down low or casually taking it to the max, adjusting the rhythmic feel behind another soloist, leaving them space or more often busily filling it, pushing them to reach their creative limits. The velocity, precision and creativity of her drumming were simply breathtaking.

I noticed during the break that the usual background music at the venue was missing, instead we were hearing Miles Davis' classic album, 'In A Silent Way'. I thought, it takes a rare level of self-belief to decide that you want to follow Miles Davis onstage.
Not only that, but Blackman Santana began the second set by announcing that they would play 'It's About That Time', from that album. In fact, they began with Pastorius playing the melody of 'In A Silent Way', before moving into 'It's About That Time'. It would be a stretch to say that Pastorius reminds me of his father, the late Jaco Pastorius. For a start, I doubt Jaco ever played an entire set while seated on a bar stool. He didn't show any of the personal or musical extroversion that made Jaco such an innovator on the instrument. But he certainly showed himself to be a superbly agile and tasteful bassist, whether soloing or locking into the anchorman role.

Curtis and Budynek also played their share of brilliant solos too, and it is no slight on their performances to say that Blackman Santana commanded the listener's attention throughout.

Given Blackman Santana's diverse cv, there was some speculation as to whether the music she would present here would be jazz, rock, funk or latin. Fair to say it was a fusion of these elements, but definitely jazz in concept with an emphasis on improvised solos, and on ongoing dialogue between the soloist and the other members of the band. In style, it was most reminiscent of the first Tony Williams Lifetime (where Williams was joined by organist Larry Young and guitarist John McLaughlin). That was one of the most exciting and influential bands of the early jazz-rock era, though never as commercially successful as contemporaries like Weather Report, or bands led by Herbie Hancock and Chick Corea. But if Cindy Blackman Santana keeps that kind of jazz-rock fusion alive and relevant (the second set included a powerful workout on 'Vashkar', from the first Lifetime album), all the more reason to hear and enjoy this band while you have the chance.