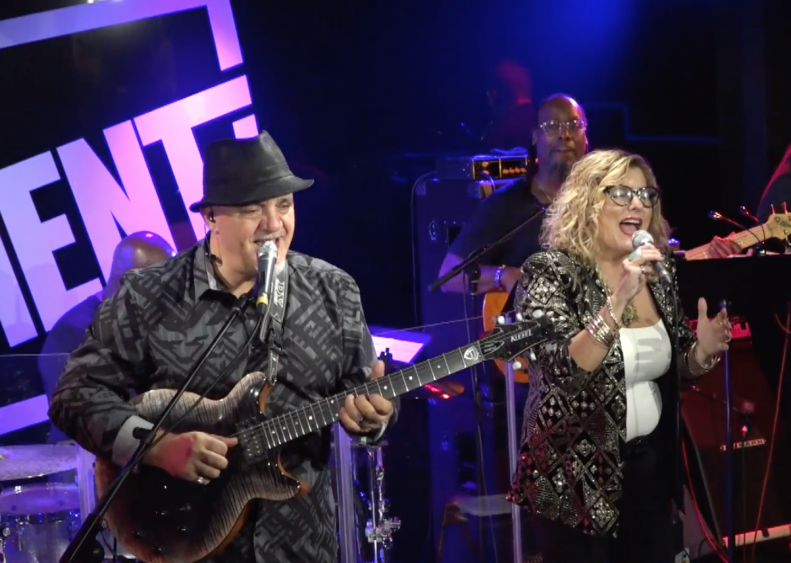 It is only natural to derive some satisfaction, or reflected glory, when a fellow Australian heads overseas, hoping to make their name in the big league and does so with resounding success.

There is no doubt that Frank Gambale, who grew up in Canberra, has done that. Since moving to Los Angeles some 30 years ago, he has worked with jazz stars like Chick Corea and Jean-Luc Ponty, released a bunch of albums under his own name, won a Grammy Award, and has earned accolades from jazz guitar giants like John McLaughlin and Pat Metheny.

I am not sure that local music fans are aware of just how successful Gambale has been on the international stage.

He brought his L.A.-based band Soulmine to Melbourne for the international launch of their second CD, ‘Salve’. Playing one long set, I suspect they presented all the music from ‘Salve’ in a performance that had both gusto and finesse.

In Soulmine, Gambale’s guitar is one of two lead ‘voices’ in the ensemble. The other is that of his partner and muse, singer and songwriter Boca Gambale, whose strong, soaring vocal style is equally integral to the band’s sound and identity. Call their music ‘fusion’’, I suppose: the jazz element is unmistakable, but it merges seamlessly with latin, funk, rock and pop elements.

Of course, Gambale’s guitar was prominently featured on every song. It can’t be easy to play lines as complex as he often does, but he somehow makes it look almost effortless. And while he regularly unleashed a dazzling torrent of notes, the quality that lingered in my minds after the show was the melodic instinct that underpinned so much of his work.

Frank Gambale and  Boca were the stars of the show, but they benefitted from the surging, unerring support provided by keyboardist Rique Pantoja, guitarist Nick Kellie, bassist Alex Evans and drummer Chris Coleman.

Soulmine received a sustained ovation from the enthusiastic audience. I wouldn’t be surprised if word gets around, and their final shows on the weekend attract standing-room-only attendances.

Adrian Jackson was the jazz critic for The Age from 1979-1999. Other publications he has written about jazz for include Rhythms, The Bulletin, Limelight, Australasian Jazz, The Wire and Down Beat.