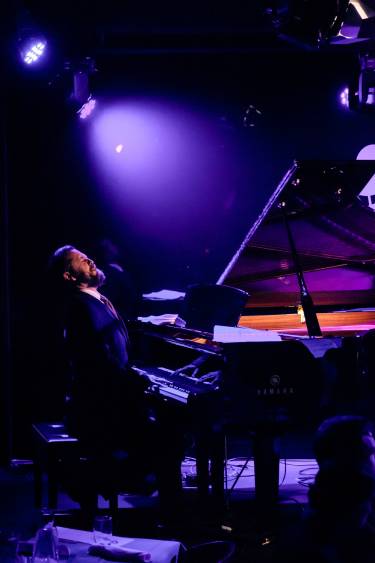 Formal / tertiary education has become an essential part of a young musician’s development these days. But nothing beats the education a young musician can acquire on the bandstand, learning from and interacting with more experienced musicians.

Melbourne pianist Barney McAll credits a great deal of his musical growth to the lessons he learned onstage with elders like Allan Browne and Vince Jones, and then when he moved to the States, bandleaders like Billy Harper, Gary Bartz and Fred Wesley. What goes around, comes around. It was pleasing to see McAll in the role of mentor now, his band Force Field featuring three very talented young musicians in Theo Carbo (guitar), Paddy Fitzgerald (bass) and Dom Stitt (drums). Another significant young talent, Paul Cornelius, normally plays the saxophone with them, but was unavailable for this gig. Tim Wilson depped for him, nailing the music as if he had been part of the band for months.

There was no suggestion of this being a ‘P Plates’ lineup, they presented McAll’s aural vision as accurately as any more experienced combination could want to. Even so, you could see them following McAll’s leads and cues : Fitzgerald sensing the note to be given extra emphasis in a slow, recurring line ; Carbo knowing what effects pedals to employ when, and understanding when to merge in and out of the ensemble, or to lay out altogether; Stitt understanding when to provide a quiet clattering in the background, when to hit the snare hard, and when to hit it even harder.

McAll led the way with piano solos that could be dense and exciting, perhaps riding a surging wave of Afro-cuban rhythm, or delicate and lyrical ; not to mention synth patterns and interjections that seemed intended to ensure his bandmates didn’t become too comfortable. A highlight of the first set was his solo rendition of the spiritual, ‘Deep River’.

The second set featured a guest appearance from London-based vocalist Daniel Merriweather, who was on McAll’s recent album, ‘Hearing The Blood’. He began with a gospel song that hit the emotional bulls-eye from the outset, some of his falsetto excursions tingling the spine, raising neck-hairs. His vocalising on an extended exploration of ‘Hearing The Blood’ was equally commanding and emotive, both inspiring and supported by spirited contributions from everyone else onstage.

Most Barney McAll gigs fit the ‘special event’ category these days. But I would rate this one as even more special than most.

Adrian Jackson was the jazz critic for The Age from 1979-1999. Other publications he has written about jazz for include Rhythms, The Bulletin, Limelight, Australasian Jazz, The Wire and Down Beat.